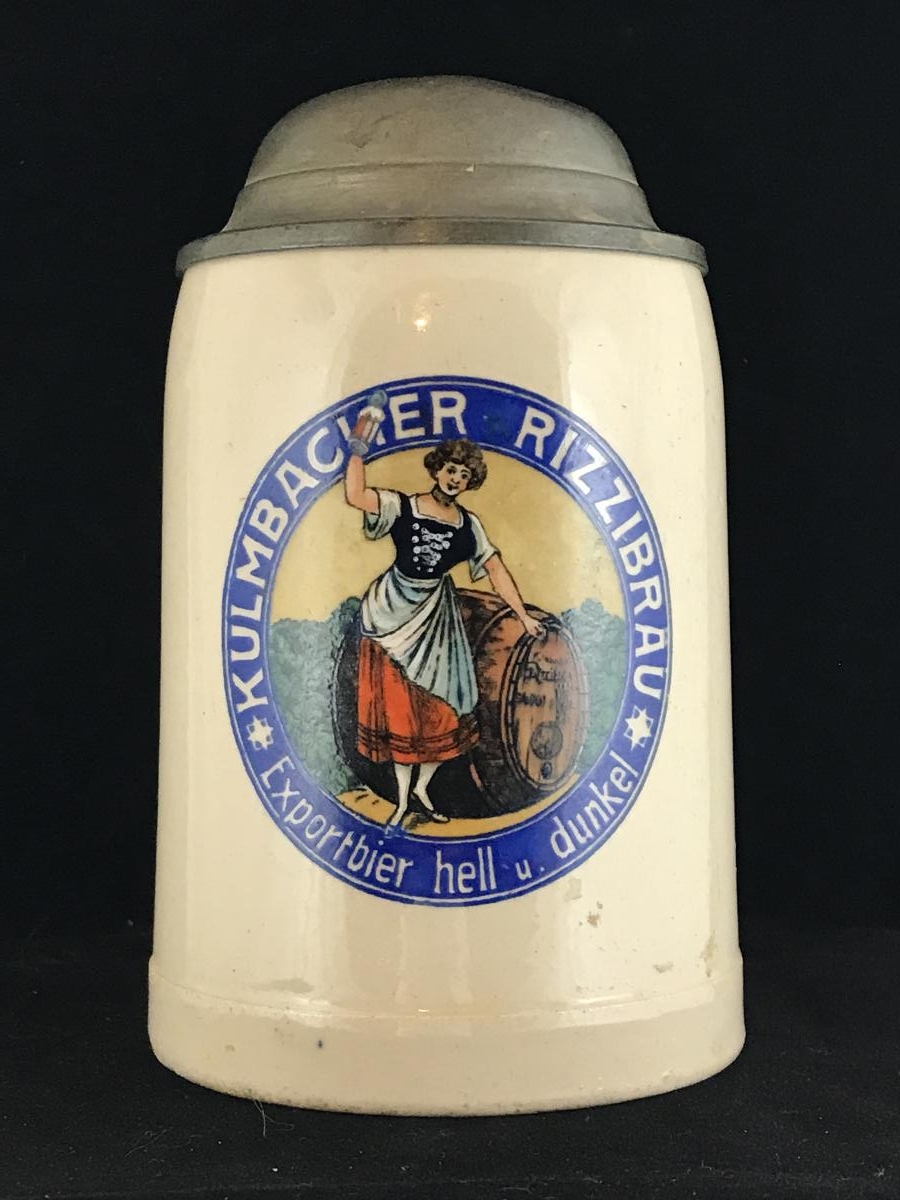 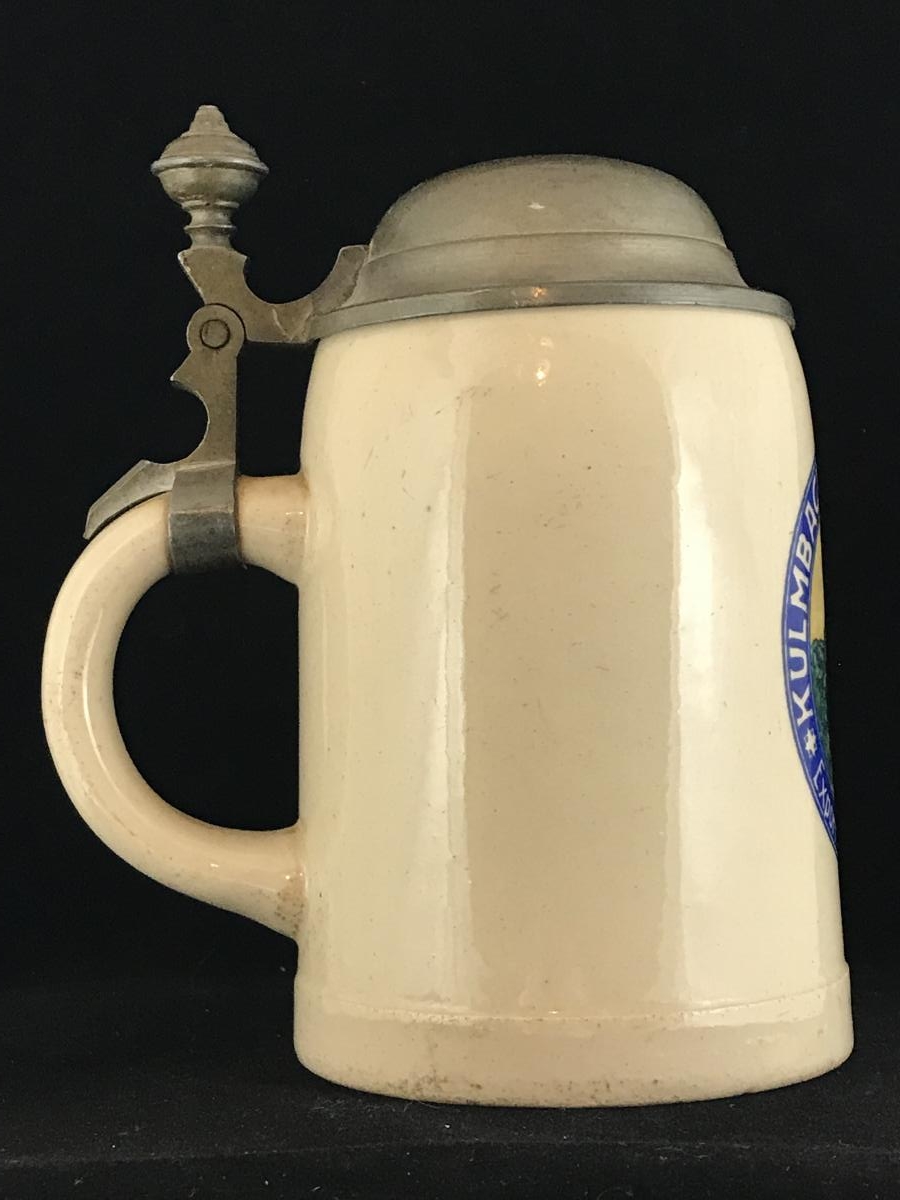 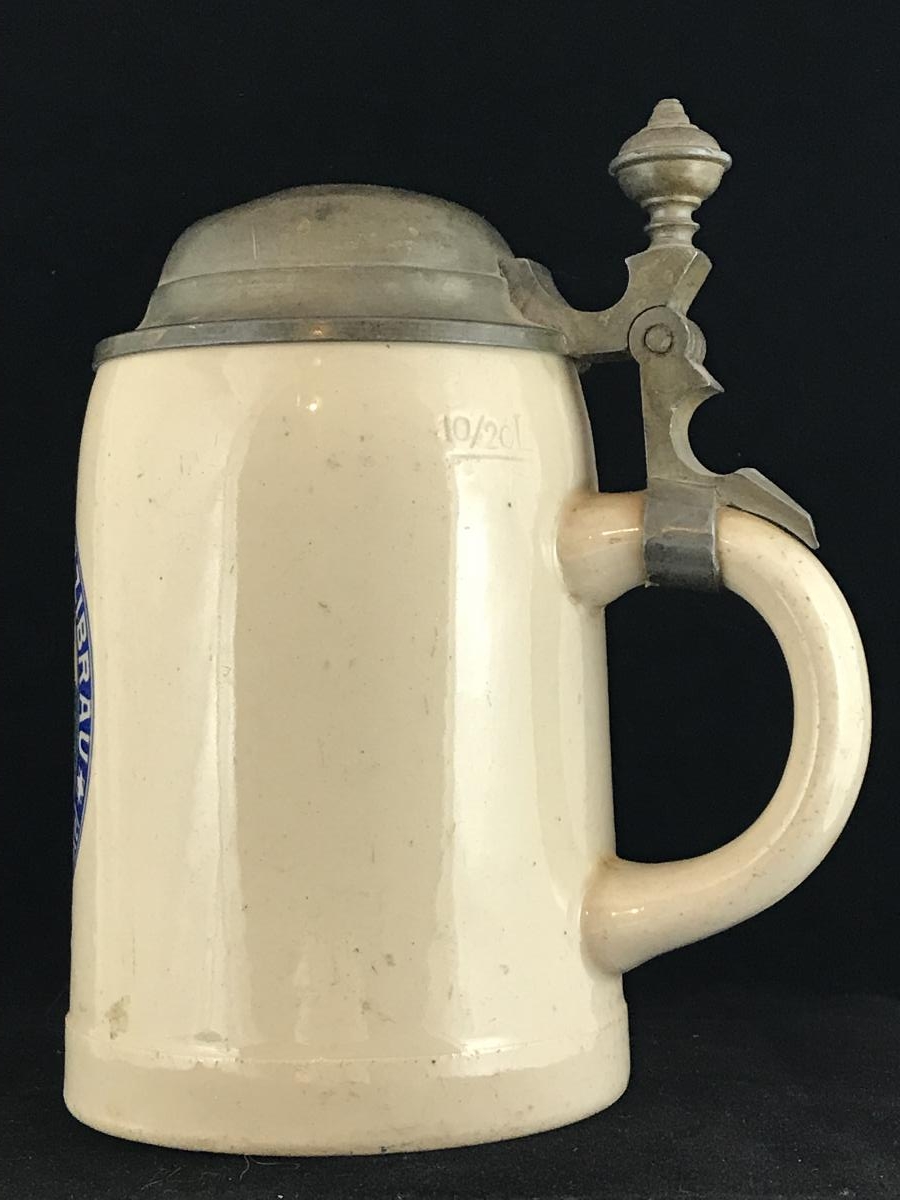 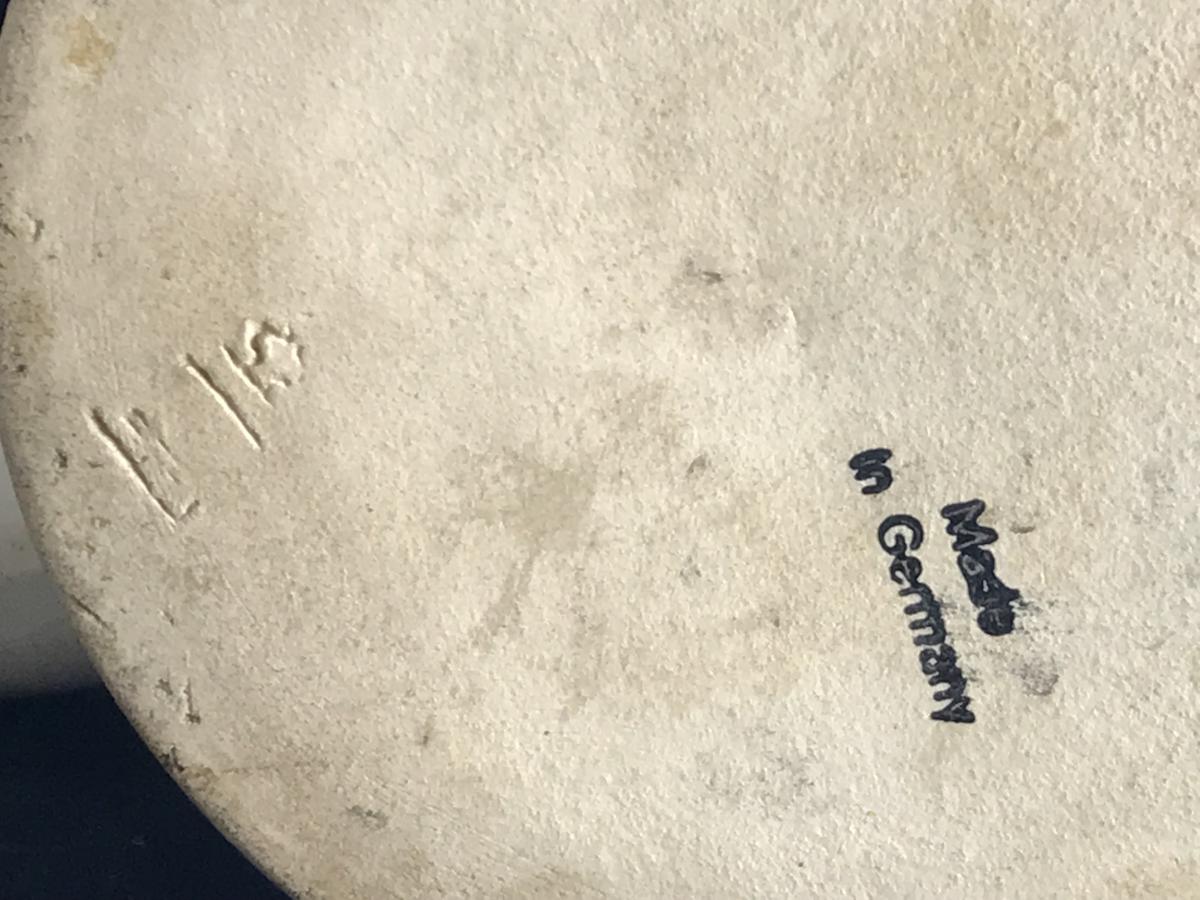 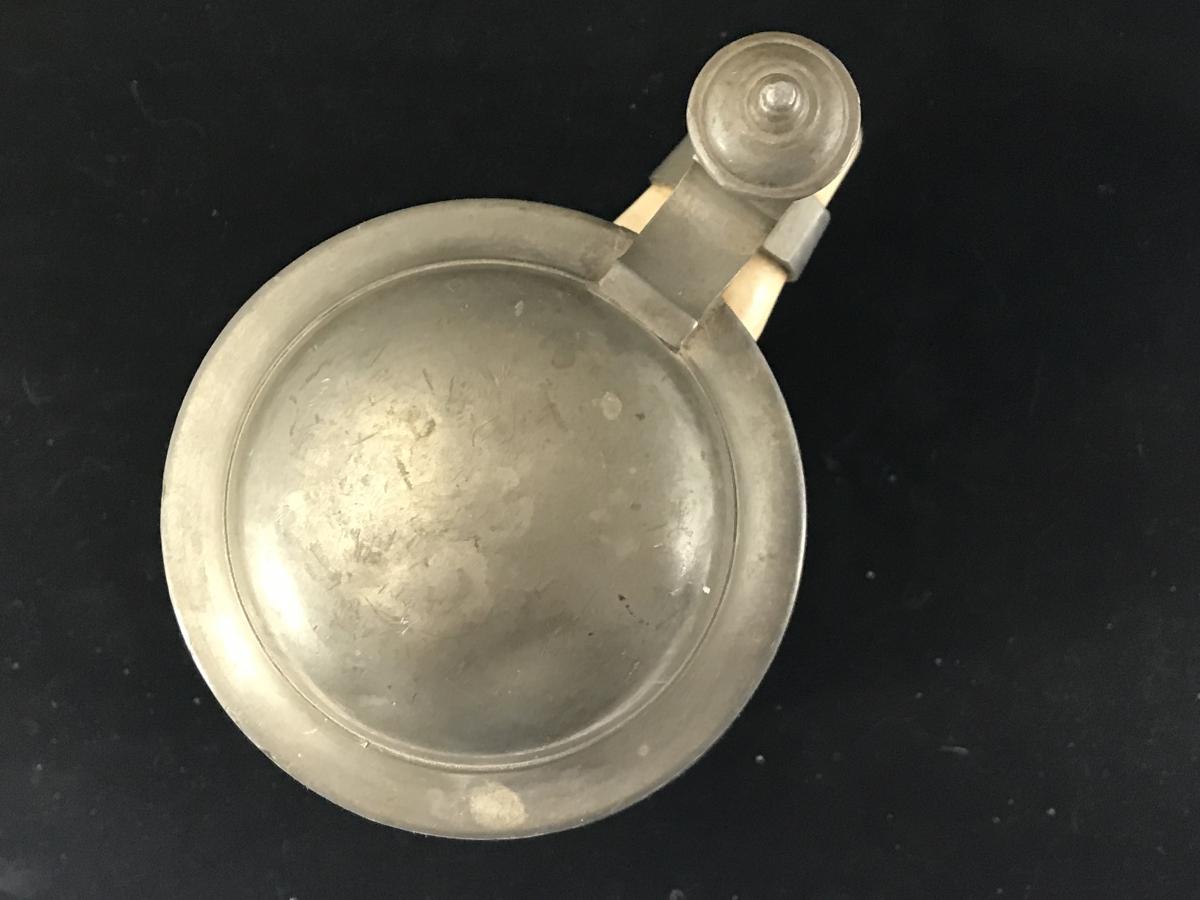 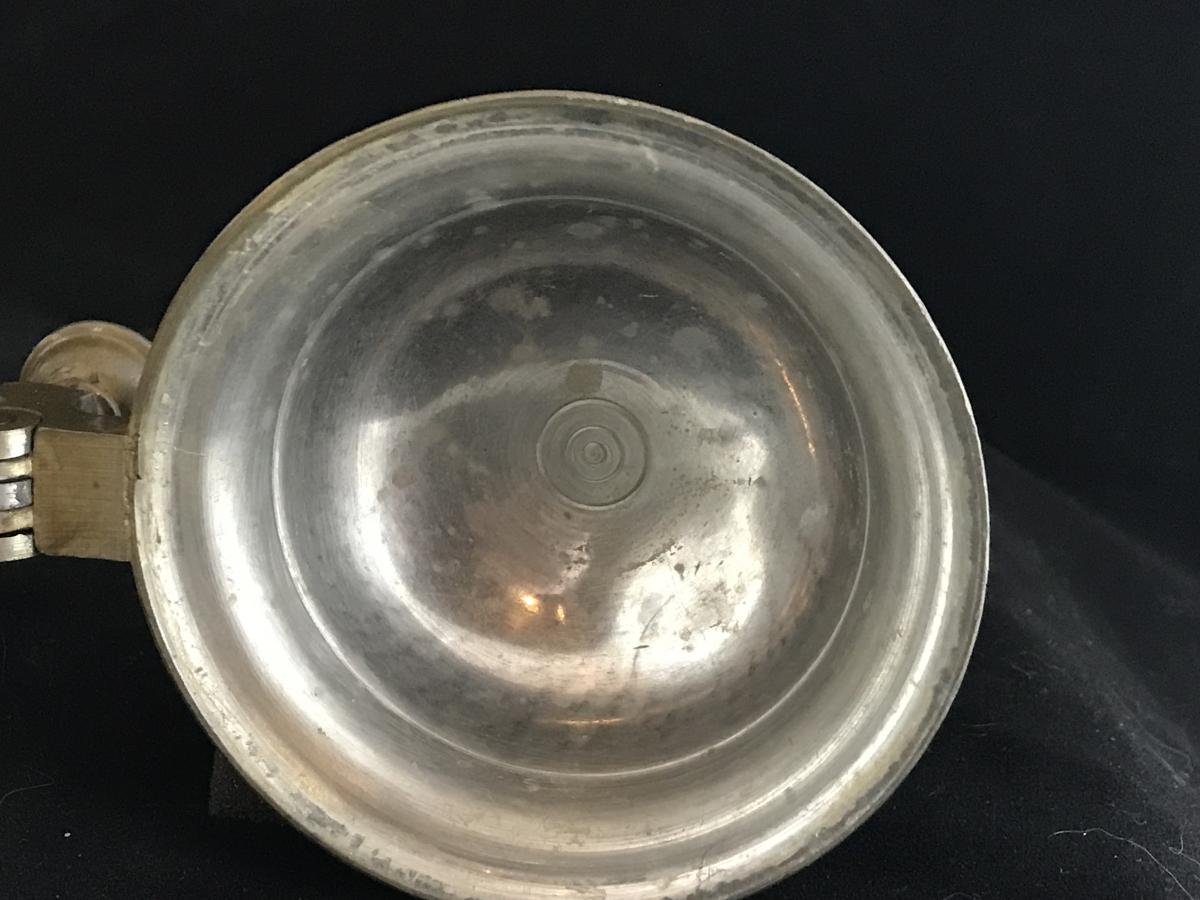 This ½ liter brewery stein with a five pin, open hinge, was manufactured by Marzi & Remy as indicated by that company’s mark on the bottom.
As early as 1831, the small town of Kulmbach, located in the Franconia Region of Bavaria, was making a name for itself as a beer brewing powerhouse as it exported 166 hectoliters (about 4,385 US gallons) of beer outside of Bavaria. Within 68 years the amount of export beer shipped to foreign countries had risen to 720,000 hectoliters (19,020,388 US gallons). There were three breweries primarily responsible for creating Kulmbach’s reputation of excellence as an international beer exporter: Export-Bier Brauerei Reichelbräu Aktien-Gesellschaft; Kulmbacher Rizzibräu Aktien-Gesellschaft; and Aktien-Exportbier Brauierei.
Kulmbacher Rizzibräu’s origin can be traced back to a brewery that was founded in 1848 by H. Riedel. The brewery was later acquired by Ed Barth and in 1871, ownership was transferred to Carl Rizzi who enlarged the facility and in September 1886, incorporated the brewery as Kulmbacher Rizzibräu Aktiengellsellschaft (a Joint-Stock Company). In November of that same year, it was registered under the company name Kulmbacher Export-Brauerei A.G., formerly C. Rizzi.
Annual production had reached 100,000 hectoliters by the late 1890 and Export Beer production in 1886 was 16,041 Hectoliters and by 1899 had reached 87,288. In 1897, the Rizzibräu purchased the Alt-Pilsenetzer Brähaus, Pilsenetz, a brewery that had received several of its own awards and was producing 800,000 hectoliters of beer, with 71,681 hectoliters of Export Beer. By 1900, the Rizzibräu had won gold medals at Exhibitions in Danzig, Würzburg, Berlin, Magdeburg, Nürnberg, Leipzig and the Highest Distinctions at Bresslau and Rheidt. The company had raised 3,500,000 Marks and constructed a new, modern brewery.
The Alt Pilsenetzer Brähaus was sold to a Czechoslovakian group in 1928 and in October 1930, Rizzibräu entered a lease agreement with the Reichelbräu Aktiengesellschaft, the largest brewer in Kulmbach. In 1931 the Rizzibräu brewery fell silent. The company technically still existed until February 6, 1943, when it was dissolved.
Sources:
One Hundred Years of Brewing, H.S. Rich & Co., 1903, p.684
Ibid.
Official Catalogue of the Collective Exhibition of the German Industry in Articles of Food at the Paris International Exhibition 1900, Published by the Committee, 1900, p.117
Albert Gieseler -- Kulmbacher Rizzibräu Aktiengesellschaft, Albert Gieseler -- Kulmbacher Rizzibräu Aktiengesellschaft (albert-gieseler.de), retrieved January 8, 2022.

Item has been viewed 95 times